Ag a deireadh míle buíochas do gach duine a cheannaigh ticéidí don oíche – na daoine a bhí ann ar an oíche agus iadsan nach raibh ann a cheannaigh iad chun tacaíocht a thabhairt do na clubanna. The fact that you turned up in the Radisson in your hundreds to support the boxers did justice to their efforts in training – we take it from the rapturous applause given to our boxers that you enjoyed yourselves!
Le fíor buíochas díobh go léir ó Sean C Burke, Barry Casey, Danjoe Foley, Conor Kelleher, Dermot O’ Driscoll, Nicky Pike & Liam Spillane.

The GAA clubs of White’s Cross and Carraig na bhFear have a rich history of rivalry and this will be taken to a whole new level with their ‘Fight Night’ at the Radisson Blu Hotel in Little Island on Friday, February 5th 2016. This event will involve members of the two clubs fighting for the honour and glory of their own club against the old rival in a series of boxing fights. 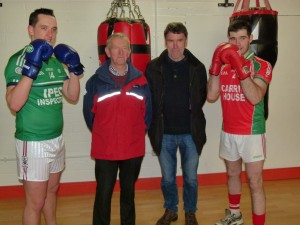 Not for the first time here in Ireland we are going to see neighbours fight for a field…! This time, thankfully, however it’s not going to be over the same field – in this instance both Clubs are seeking to buy land adjoining their current grounds and thus have come together for this joint fundraiser. 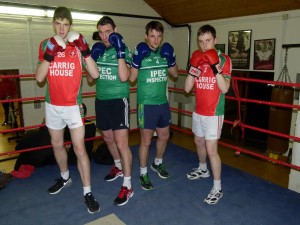 On the GAA playing fields Carraig na bhFear and White’s Cross GAA clubs continue to grow and prosper, and both clubs have significant development plans for their playing facilities, each seeking to purchase adjoining grounds to cater for the ever-increasing numbers of teams they are fielding. In order to meet the significant costs associated with the purchase and development of lands in both clubs, we have decided to join forces for this novel fundraising event. Training of fighters commenced in early November and it’s shaping up to be another humdinger of a battle between the two clubs, which will no doubt spark some story-telling around previous duels between the clubs forty years and more ago! For now, be sure to mark Friday February 5th, 2016 in the diary and keep an eye on communications from the two clubs to see how the training of the boxers is progressing. 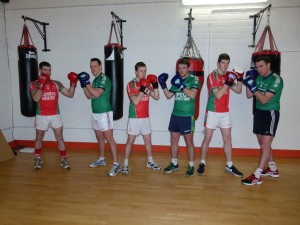