Our U10 footballers took part in the last Rebel Og Monster Football blitz of the year in the fabulous Mallow club facilities on Saturday last, 3rd October.
The lads had a great day out and received medals from Cork Senior Footballer Tomás Clancy of Fermoy, who was in attendance. The Monster blitz series is a great initiative and a huge logistical undertaking. Over 800 U10s and U8s attended the blitz in Mallow on Saturday alone, with similar events being held simultaneously in St. Vincents, Bishopstown, Clonakilty and other venues around the county. In total, over 2600 children took part and over 240 teams played 360 games. Well done to all involved and we look forward to seeing these stars of the future in action in the red and green of Carraig for many years to come.
#HonCarraig
#ArAghaidhnabhFear 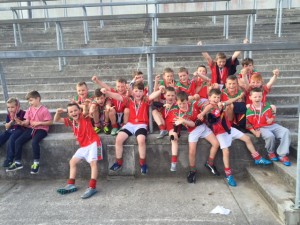