Greetings to all our Readers. I hope you are all keeping well and gradually embracing Springtime as the evenings get longer and temperatures ( hopefully!!) start to rise.

Here is a quick update as to what has been happening in the our club over the last four weeks:

Our Juvenile Club held its monthly meeting on February 12th. The meeting was well attended and involved a lot of discussion around grading of our juvenile teams.  A central message to come from the meeting is that every team is important, every player is important and that it is through constant dialogue and a willingness to work together which underpins the club ethos for 2019. Our playing numbers are not huge and therefore, our club hopes that every member, parent and supporter will encourage each juvenile player and team to take part and be part of the club, in whatever form they can.

The various team mentors from U6 straight through to U18 gave reports as to how their groups were forming for the year and what concerns they could envisage. Nearly every age group has started its early season training, with football league games pencilled in for the month of March. Our future stars of (U6 and U7) have started training in Carraig college in the last few weeks amidst a welter of excitement!!!  And that was just the coaches!! 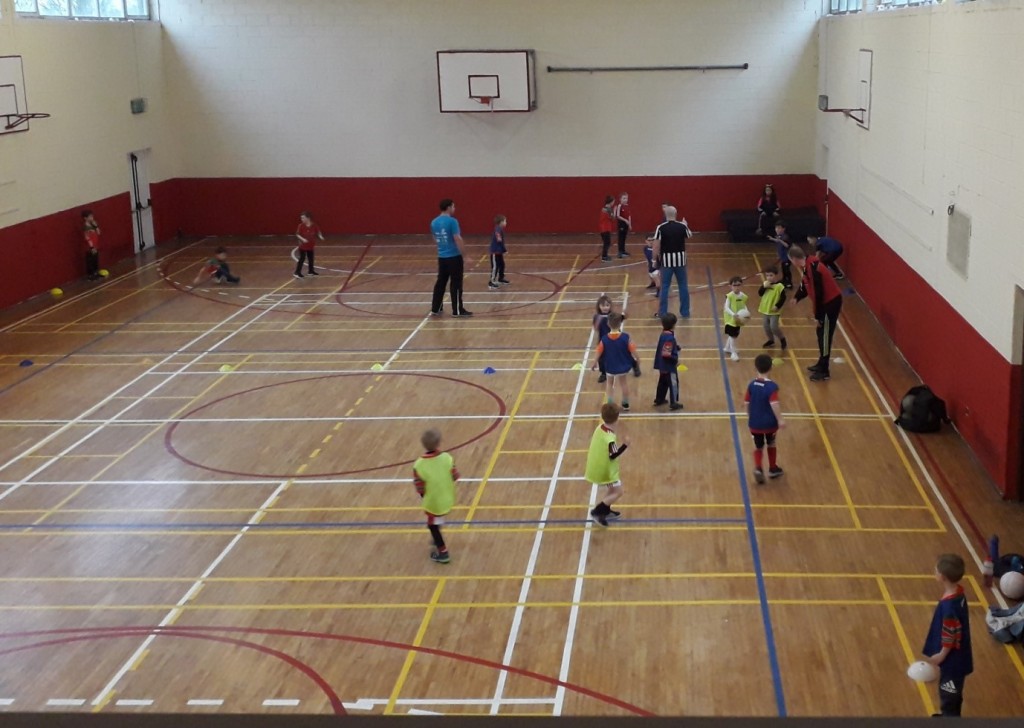 The Juvenile players struggle to contain their giddy coaches in training

One significant landmark for 2019 was an acknowledgement by Rebel Og in relation to the running and administrative side of our Juvenile Club. Our club was given a bronze benchmarking award for the 2018 season and it is deserved recognition for a lot of the thankless and unseen work done by a number of officers and mentors over the last 12 months. Well done to everyone.

Another notable event was the appointing of Lauraine O Donovan as Public Relations Officer in the Juvenile Club for 2019. Ard chomhghairdeas Lauraine.  Welcome and we hope you have a fun and enjoyable year.

Well done to our Under 10 team who had a successful and envigorating day in Pairc Ui Chaoimh on Saturday March 9th where they took part in a blitz. They played two games and won both. Ard fhir, and well done to the parents and mentors who had an enjoyable day out!

Round 2: Carraig na bhFear 0-11 Lisgould 0-09. (Sunday Feb 17th 2019)
Our Junior Footballers have a 100% record so far in the Football League.  Our first performance was a particularly good display with the Ahern brothers, Jack and Michael providing a solid platform from mid- field in which the foundations of the win were borne. Stephen Casey was dependable at full back and it is always great to see players coming home when they can to tog out and play for their club. Paul Murphy and Paul O Keeffe were the scorers in chief and the result was never in doubt.

The second game of the league season was a different game in which the Carraig team acknowledge that we were a small bit fortunate to garner the win. This was a teak, tough game of football with never more than two points between the teams. Conditions were blustery and handling proved to be difficult for both teams. However, with our defence doing well, lead by Timmy Geaney and Tomás Sheehan, Carraig held out and are now on four points on the league table.

The adult club held its monthly club meeting on Friday 1st March.  Here are some of the notable decisions/discussions that took place

Comhghairdeas mor ag dul amach ar Sean agus Sarah Hegarty, buateoiri an Chrannchuir Sheachtainuil. February was a brilliant month for the lucky winners of our club lotto. Everybody from Carraig na bhFear CLG would like to extend the warmest of congratulations to both Sean and Sarah Hegarty. Both Sean and Sarah have been constant supporters of the club, be it through the lotto or as club officers and we do hope they have great fun and enjoyment from their win!

It is that time of year again. The greatest show on earth…..well maybe! The yearly pilgrimage to Coole Cross is over 30 years in existence and remains as popular as ever. So get your hurley, golf stick or whatever you have at hand, come out for a walk and hit a few sliothars whilst you do it!!

Proceeds for both our Poc Gearr and Poc Fada will be in aid of Marymount Hospice.

Beidh an Poc Gearr ag tosnu ar a deich a chlog. 10am start for the Poc Gearr, where the Grand National rush of bodies, hurleys and sliothars will occur from the entrance of Cholaiste Chroi Naofa.  Come and witness it…..Naomh Phadraig and a few of his friends may also show up!!

Beidh an Poc Fada ag tosnu ar a leathuair tar eis a haon deag, san ait gnath, Coole Cross. The annual poc fada will be ready to go from 11.30am onwards. Patrons can come from anytime before or after 11.30. So if people want to go to mass or head into town for the parade, then it is not a problem. Club officers will be on hand to give you your score card and sliothar. Registration is 15 euro for a team of three.

Faoi dheireadh, to finish the day, we would invite all our members and friends to come and mingle on St Patricks night in Carraig House. There will be a medal presentation to the victorious Junior Hurling team ( Winners of the East Cork  C Championship and Division 3 League Cups 2018).  It is a notable night as we welcome back the Michael Foley Cup to its native land. And there will also be a light hearted element to the night with some prizes to be won for those with a very good sense of humour……..intrigued…???? Come and find out what this may involve!! All will be revealed on the night!! The fun shall commence from 7.30pm onwards!