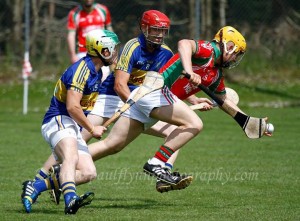 Carraig na bhFear are safely through to the draw for the third round of the East Cork Junior A Hurling Championship, but it took a big effort to overcome a strong Carrigtwohill team who fought to the end. In perfect conditions in Watergrasshill, both sides produced some excellent scores and a late comeback from Carrigtwohill provided a close and exciting final 10 minutes.

Management handed youth its fling, with the Forde twins, James and John, making their first starts at this level, joined by James Meehan at midfield, also making his first championship start. We opened the scoring in the first minute with a wonderful point from the left corner from John Forde and by the 7th minute had extended the lead to 0-04 to 0-0.  Martin Hickey was the star performer in the opening stages and a wonderful point from distance was the highlight of the opening stages. Carrigtwohill responded with two points in quick succession as the sides traded scores for the next 10 minutes. Carraigs corner forwards were looking particularly sharp but the presence of an extra man in the Carrigtwohill defence saw them repel alot of pressure successfully. After 20 minutes we lead 0-09 to 0-06 and but for a couple of good saves from the Carrigtwohill keeper, the margin could have been wider. John Forde was in great form on the frees another monster point from Martin Hickey and a fine point from Paul Murphy saw us lead by three at the break, 0-12 to 0-09.

The second half followed a similar pattern to the first, with Carraig stretching the lead only for Carrigtwohill to come back and reduce the margin again. Substitute Noel Mullins had a positive impact around the middle of the field after his introduction while Daniel Coleman, James Forde and Tomás Sheehan were coping well with the 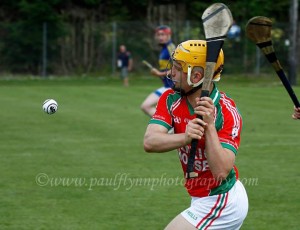 Carrigtwohill full forward line, lead by former Cork star Niall McCarthy. The points flowed thick and fast in the early stages, leaving us 0-17 to 0-012 ahead after 37 minutes, mainly through the free taking of John Forde. Carrigtwohill continued to chip away at the lead however and took some fine points from distance and from frees. A 21 yard free for Carrigtwohill saw their keeper travel the length of the field, but his effort sailed over, rather than under the crossbar, as the scores stood at 0-22 to 0-17 after 49 minutes.

The game was turned on its head shortly afterwards however, when a free dropped short into the square, rebounded up off a crowd of attackers and defenders to a waiting Carrigtwohill forward, who had the simple task of dispatching the sliothar to the back of the net and it was game on. Bouyed by this, Carrigtwohill notched the next two points in the 53rd and 55th minutes to level the match. It was anyones game now and both sides pressed hard to take the lead. Paul Murphy made a great run, set up by Aaron Dorgan and he saw his shot saved well by the Carrigtwohill keeper. The Carraig defence repelled the Carrigtwohill onslaught well, lead by Timmy Geaney and in the final minute, Noel Mullins switched the play from the left wing to right corner, where Paul Murphy won possession, turned his man, before being hauled down for a free. From a difficult angle it fell to John Forde to take the crucial shot, but as he had done throughout, the ball sailed straight over the centre of the crossbar to restore our lead on the stroke of full time. Carrigtwohill had one more chance, but the ball dropped harmlessly wide under pressure from the defence. Full time score Carraig na bhFear 0-23 Carrigtwohill 1-19.