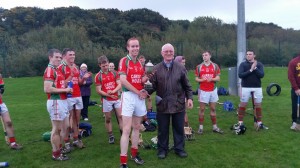 Well done to our Junior B Hurling team who had a well deserved win over Aghada in the division 4 league final last weekend. Carraig lead from the start and a goal from Conor Hayes capped a great opening period for the team. Brian Sheehan was solid in goal while outside him, Shane Horgan, William Spillane and James Forde were dominating their positions. Up front, John Forde and the aforementioned Hayes threatened throughout, while Aidan Sheehan was a great target in the forwards. We lead at half time 1-07 to 0-04.
The second half saw Carraig get off to a great start when substitute Cormac Hill, introduced at the break, was on the end of a long Aidan Sheehan delivery to score our second goal. Further points from Forde, Padraig O’Sullivan, Brendan Murphy and James Meehan followed as Carraig continued to keep the home side from threatening at the other end. A full compliment of substitutes were introduced in the closing stages as Carraig ran out winners on a scoreline of 2-13 to 0-08.

Well done to all involved, this team went undefeated through their league campaign and were worthy winners. Don Hegarty presented the cup on behalf of the East Cork Board to captain William Spillane, who gave a great speech that will be remembered for manys a year!
Congratulations lads, roll on 2015! 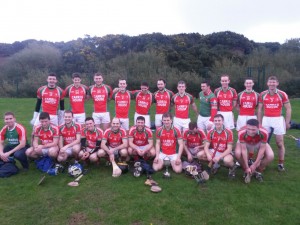 The Carraig na bhFear side who defeated Aghada