On September 21st 2016, Mary Geaney ,our former Club Secretary and proud native of Spancill Hill in Clare, passed away following a lengthy illness.  Her love of dancing in her youth took her to Limerick, where she met, fell in love with, and married Tony. Mary moved to Carraig na bhFear, and became the proud mother of Caroline, Michelle, Antoinette, Noelle and Michael.

Mary involved herself in many community organisations, and gave freely of her time and expertise. She was a very hardworking committed Club Secretary, and we will never forget her total and absolute dedication to her work.  She never sought the limelight, but was happy when giving of herself.

Mary also worked as Primary School Secretary until her illness and her wonderful memory for occasions, and her many talents, were shared generously. She was full of life and energy, and took great pleasure in seeing people achieving their potential.  Always ready to help people in need and was an inspiration to us all.  She always had the interest of people uppermost, and nothing was too much trouble for Mary.  Those fortunate to have known her were indeed honoured.

Mary’s essence can be summed up, as a community volunteer, wife, mother, grandmother and wonderful Christian.   She touched the lives, of all those, who were fortunate to have been in contact with her.  Mary will be fondly remembered for her many talents, being a loyal friend, colleague and inspiration in adversity. Slan a chara Mary, agus in iothlann Dé go  gcastar sinn.

The under 6’s wrapped up their playing season with the last series of games in their Parish League last Saturday morning. There was a big attendance for these final games and the 4 teams gave their all. There was great skill on show and the years work was fully evident. This bunch, have shown a great appetite for fun and games all year. The improvement in them is a credit to themselves, their parents and their great team of coaches. The coaches have made it fun and inclusive for all, and the ever increasing numbers at training are a testament to that.

There is an end of season fancy dress Halloween party on this Friday the 28th Oct @ 6.30 in the Community hall.

The U7’s and 8’s played the second of a series of three matches in their Parish leagues last Saturday.

Two U7 teams called “Squad X” and “The Carraig Warriors” did battle in football on a lovely morning. The competition was fierce and the result was in doubt until the final minutes of the game. I believe the games are tied at one victory each going in to the final round of games next Saturday, so all is on the line again next week. Well done to all the players taking part as this competition has brought out their competitive side and as a result the games have been keenly contested.

The same can be said of the U8 squad who have been split into three teams namely “ The Unstoppables”, “Carraig Cup” and “Carraig Warriors”. The games again have been very close with “Carraig Cup” holding a slight advantage going into next weeks final round of games. We can’t wait to see how this will pan out!

Again, there is an end of season fancy dress Halloween party next Friday night in the community centre @ 6.30 and word is that children that are recognisable will not be allowed in!! See you all there. 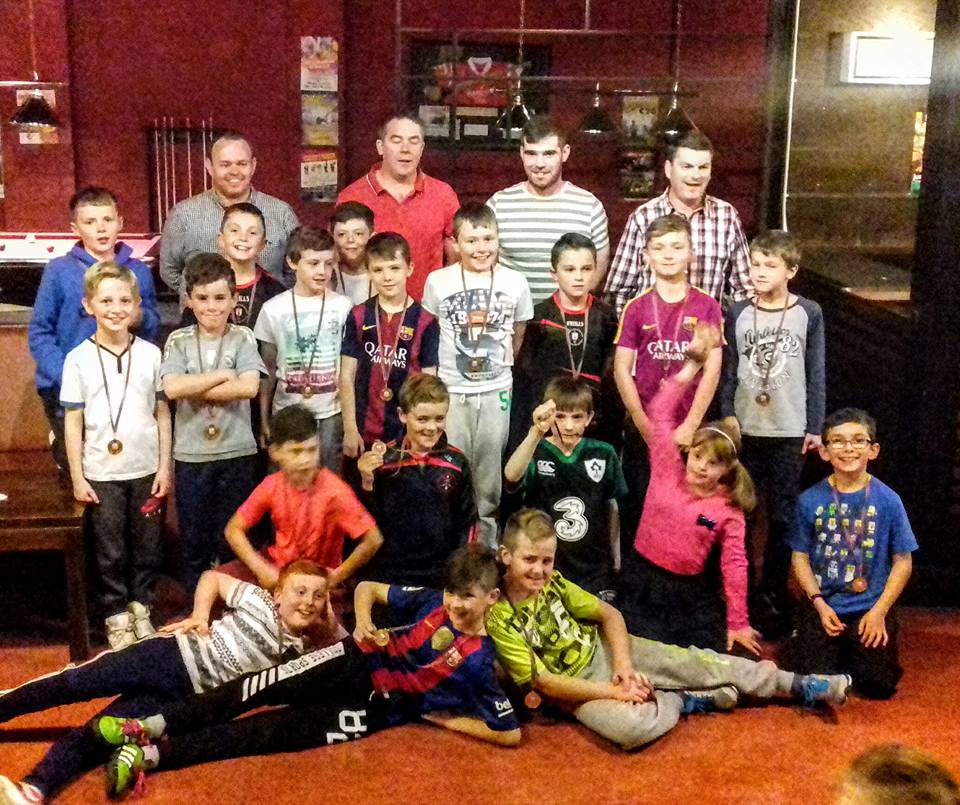 The U10’s had a wonderful end of year party in the Planet last Friday night- fun, food & medal presentations. Thanks to all trainers – Adrian O Halloran, Aidan Bowen and head coach Will Ryan ,who are also supported by parents when the need arises .A word of thanks to Timmy Geaney for presenting the medals on this special occasion. A surprise award was given to Kate Harte for best supporter 2016.

Our U14 season came to an end in the Padraig Kelleher Memorial Football tournament. Thanks to all of the players who played a part in this, and all of the games this year. A great bunch of lads and the club is very proud of you. Some great memories for all involved. Roll on 2017!
.

Carraig na bhFear Athletic club hosted the Munster Cross Country championships last Sunday in Ballinahina. A number of our players competed in these races and we are sure to see the benefit of this on the playing fields. It was a great honour for the club to host such a large event, so well done to all involved.

Coaching continues in the Scoil an Athar Tadhg each Monday for Junior Infants up to 2nd class. Unfortunately last Monday weeks’ session had to be postponed at short notice, but all is back on track now. If you have any queries or questions regarding this service, feel free to contact Tony Dunne on 087 6167890.