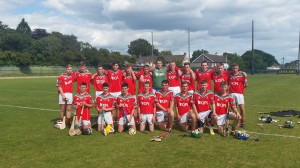 After a pulsating 60+ minutes of championship hurling on a perfectly prepared pitch in Ballinlough, Carraig na bhFear advanced to the final of the Rebel Óg East Minor B hurling championship with a five point win over near neighbours Grenagh. Carraig started well and an early goal chance for Brendan Murphy was well saved by the Grenagh keeper. Nerves were on show however and a number of good point chances went abegging in the opening stages before Grenagh opened the scoring after five minutes with a lovely point from their centre forward. With Cork Minor Shane Bourke dominant in defence, the mid Cork side began to get on top and limited Carraigs attack to few scoring opportunities in the early stages. Grenagh scored their second point after 11 minutes as Carraig continued to struggle to find the target, despite some good attacking play from Oisin Crowley, Ryan Galvin and the lively Shane Farrell.
Carraigs opening score came after 16 minutes, but crucially it was goal. Conor Hayes won possession in midfield and played a dangerous ball in, which was broken by Brendan Murphy and finished to the net by the waiting Farrell. Grenagh responded well with a point and the sides were level after 20 minutes. Our first point from play came soon after from Conor Hayes out on the right wing but Grenagh looked set to take a lead into the break, picking off two points, one from a free and one from play in the 28th and 29th minutes of the half. But Carraig went in level at the break as Oisin split the posts with a well taken free as we turned to play with the aid of the stiff breeze with the score Carraig 1-02 Grenagh 0-05.
The second half saw both sides up the ante considerably and some wonderful hurling was served up for the sizeable crowd in attendance. Oisin was on target with a brace of frees in the 35th and 37th minutes as our attack began to click and some good runs from Shane Farrell, Aaron O’Donoghue and Brendan Murphy, now operating at centre forward, created plenty scoring chances. In defence, Diarmuid Murphy and Cathal Cronin were putting in huge shifts, ably assisted by Michael Ahern and Darragh Cronin. Grenagh responded well with a point as they began to get a grip around midfield. An injury to a Grenagh defender lead to an indirect free for Carraig on the right wing about 45 yards from goal. Unable to go for a score, Oisin Crowley instead opted to drill the ball into the square at a dangerous height. The ball was knocked down in the square by a Grenagh defender and Ryan Galvin was on hand to finish it to the net for our second goal. Grenagh replied immediately with a point but Oisin pointed another free, won after hard work from Shane Farrell, to keep us 2-05 to 0-07 in front after 42 minutes.
The sides traded points but Grenagh were battling hard to get back into the game and piled the pressure on the Carraig defence. Another point from Oisin on 55 minutes and a quick reply from Grenagh left us 2-07 to 0-10 in front with Grenagh searching for the goal that would bring them back into it. Christopher Cremin in goal brought off a couple of good saves, a 21 yard free was conceded and Grenagh went for it, only to see their effort saved and cleared. From the clearance, Ryan Galvin won the ball on his own 65 and took off, with three defenders on his heels, all the way through to the 21 before finishing brilliantly to the far corner of the net, to the delight of the large Carraig following in attendance.
With time running out, Grenagh notched up their 11th point but they needed goals and the Carraig defence was put to the pin of its collar. Christopher Cremin caught a dangerous ball under his own crossbar deep into injury time and won a free, while another 21 yard free was saved on the line by a sea of red and green bodies. In the fifth minute of injury time, Carraig broke forward, with Brendan Murphy in possession. He found Ryan Galvin in a great position and the finish was emphatic once again as he claimed his hatrick to seal the game. There was one last chance for Grenagh, as Shane Bourke, now operating at full forward, finally breached Cremins goal with the final puck of the game in the sixth minute of injury time. A hard fought win for this young Carraig team and a great result against a fine Grenagh side who played some great hurling throughout.
Next up for Carraig it’s the winners of Donoughmore and St. Vincents in the Rebel Óg East Final, to be played in a few weeks time, while the team must refocus now for their football semi final against Aghinagh in Donoughmore on Wednesday night.