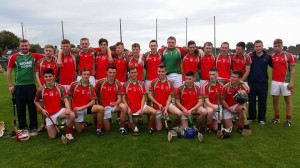 Carraig na bhFear are the Rebel Og East Minor B hurling champions for 2014 after a great win over Donoughmore in the final in Ballinlough. There was just two points separating the sides at the end in what was always a close and competitive game. Donoughmore started the brighter of the two sides and two quick points gave them an early lead, as Carraig seemed to suffer with some early nerves. Ryan galvin struck for Carraigs opening point from play and both sides began to hurl well, with Carraig captain Brendan Murphy showing well for the ball at full forward and Shane Farrell and Adam O’Sullivan working hard along side him, the sides were level after five minutes.

The next 10 minutes belonged to Donoughmore however, a series of well taken points from frees and from play pushed them into a four point lead, 0-06 to 0-02. Carraig saw a good goal chance saved by the in form Donoughmore keeper and some wayward passing in attack meant that scores were hard to come by. Donoughmores lively attack was causing problems for our defence too, but the switch of David Sweeney to wing back mid way through the half helped to stem the tide somewhat and with Michael Ahern sweeping up at centre back, Carraig began to claw their way back into the game. Oisin Crowley was unerring from frees and with Murphy and Farrell continuing to threaten, the sides were level again by the 20th minute. A point for Donoughmore was quickly followed by another, the second seemed destined for the net only for the fine stickwork of Christopher Cremin in goal. Carraig rattled off three points to take the lead by the 29th minute before a late free for Donoughmore saw the sides head for the dressing rooms level at the break 0-09 apiece.

Having started slowly in the first half, Carraig came flying out of the blocks after the break. Ryan Galvins fielding in the half forward line was the source of a number of attacks, but some poor finishing saw these go abegging in the opening minutes of the half. We took the lead on 35 minutes with a well taken point, just reward for the good start to the half. This seemed to settle the players and in the subsequent 5 minutes they let loose. Another point was followed by a well taken goal, Adam O’Sullivan on hand to pull home from close range after great work by Galvin, Murphy and Farrell to create the opening. Carraig added a point from a Conor Hayes 65 and another point from play soon after from David Sweeney, which left us with a 1-13 to 0-09 lead 12 minutes into the second half.

Donoughmore battled back however and rattled the Carraig net with a well taken goal, game on again at the three quarter stage 1-13 to 1-09. The sides traded scores as the intensity increased, with Paul Sheehan and Conor Hayes battling hard at midfield to help the defence. A great block from Diarmuid Murphy prevented what looked like a certain goal before Donoughmore added another point from a free. Oisin Crowley pointed a free for Carraig to keep the gap at four points with 10 to play. The pressure was on now and Donoughmore reduced the margin to a single point with three points in the 54th, 55th and 57th minute, the latter one could have been a goal but for the quick reactions of Cremin in goal, coming off his line to force the attacker to hurry his shot.
Carraig brought Brendan Murphy out the field late on and he won some great ball to ease the pressure and a late point from Adam O’Sullivan extended the lead to two points heading into injury time. Donoughmore pushed on in search of the scores they needed but the defence held firm and cleared their lines effectively. The full time whistle blew and there were cheers of joy, relief and triumph as Carraig had held on for a famous win.

Carraig Captain Brendan Murphy accepted the cup on behalf of his team and thanked the team management, Mark Crowley and Gavin Webb for their hard work throughout the year, while acknowledging the contribution of Donoughmore to what was a very entertaining and exciting game of hurling between two evenly matched sides.

For Carraig it is a first Minor title since 2010 and hopefully the team can go one better and add a county title to this East Region title. Well done to Gavin, Mark and all the lads for their hard work, championships are hard fought and hard won and this one was no exception. Congratulations lads, enjoy every minute of it!