Carraigs Minor hurlers lost out to a sharp Courcey Rovers outfit in a pulsating Rebel Og East Minor A Hurling Championship Final in Ballygarvan on Saturday evening last. The Ballinspittle outfit came into the final with strong credentials and in the early stages they looked every part the favourites, opening a three point lead inside the first five minutes. Carraig took a while to settle, but once the lads got to the pace of the game, they stormed back into it. The sides were level by the 12th minute, with Conor Hayes and Cormac Murphy finding the target. In defence, Gary Geaney and Thomas Coleman were having more joy, while young Jack Ahern hurled confidently throughout. Courceys had strong performers in Sean Twomey and Tadhg O’Sullivan and continued to threaten Conor O’Briens goal throughout the early stages. Their pressure told on the 15th minute when a fine move culminated in the games opening goal.
Two further points followed and a five point gap had opened up by the time Conor Hayes huge free sailed over for Carraigs first score in 10 minutes. Brendan Murphy added to this shortly afterwards and it was back to three. Then a long ball down the left wing found the dangerous Cormac Murphy, who cut in past his man and drew the defence, before swiftly passing to the onrushing Sean Fitzgerald who batted powerfully to the net for a fantastic goal! The sides traded points again but Courceys tacked on two more minors before the break to give them a 1-08 to 1-06 lead.

Carraig needed a strong start to the second half, but it was Courceys who scored first, picking off two well taken points to extend the lead. But when the game looked to be slipping away, upped stepped Cormac again with another driving run, laying off perfectly again to that man Sean Fitz, who picked his spot expertly for another brilliant goal. The large Carraig crowd in attendance were now in full voice and the game was firmly in the melting pot. The sides traded points but some good opportunities for scores for Carraig also went abegging. David Sweeney and Paul Sheehan were now showing the form that had them starring for the Junior hurlers earlier in the summer, while Michael Ahern was leading the resistance in defence as Courceys continued to press. By the 50th minute, Carraig reduced the margin to a point, 1-12 to 2-08, but it was Courceys who found that extra gear. 4 points between the 54th and 60th minutes stretched the lead to 5 points, as Carraigs chances were limited to long range efforts late on. It wasn’t to be and a worthy Courceys team held on for victory.
This was a fantastic effort by this group of players. A small panel, with just 18 available players due to injury, have put in a huge effort all summer. Younger players like Jack Ahern and Adam Gorgia have come on in huge leaps throughout the year, while the lads up to the age have lead by example. Credit must go to Gavin Webb and Brian Hegarty for the work put in all year. But it’s not over yet! Despite the defeat, we’re still alive. We now proceed to the County quarter final, with a chance to make up for last Saturdays disappointment still up for grabs. Keep up the hard work lads, ye have every chance! #HonCarraig 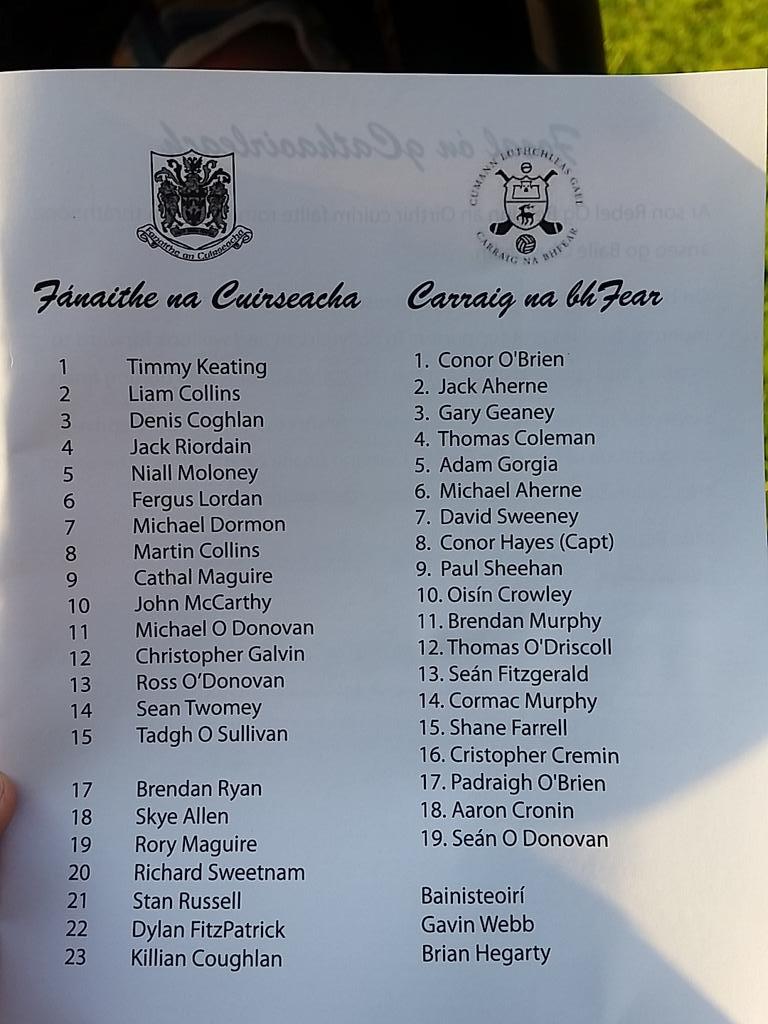