U14 Hurlers march on to Féile semi finals! 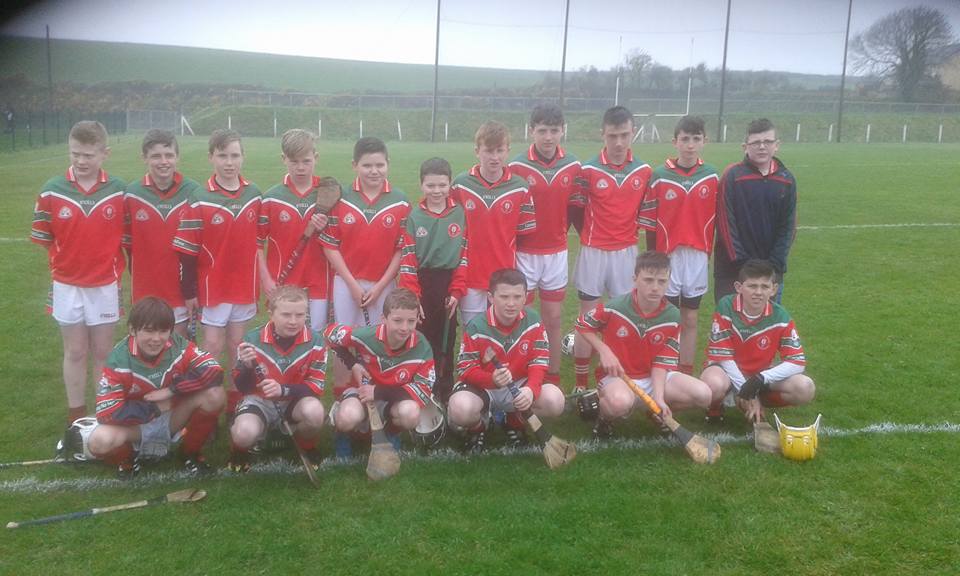 Well done to our Under 14 Hurling squad who qualified for next weekend’s Hurling  Feile Semi-finals. The group stages took place at a rain-soaked Passage GAA grounds on Saturday 7th May. Despite the testing conditions, the lads started the competition in a positive way in a very tight game versus Fr O’Neill’s.  There wasn’t much between the two teams and the decisive score was a great goal from Billy Connolly and the game finished with a 4 point win for Carraig. Our keeper for the day, Darragh Tattan, made some brilliant saves in this match and the importance of these saves would prove to be crucial later in the day’s proceedings.

The lads had a bye in the next round and had an opportunity to watch the next 3 opponents in action and the evidence was that nothing was going to come easy over the next three games. With the rain still pouring down , the lads took to the field to face hosts, Passage West, and our defence was outstanding in this game limiting Passage to just  0-2 while our midfield and forwards scored 2-9 between them. Final score in this game was 2-9 to 0-2.

Our third game was a renewal of rivalries with Watergrasshill as both sides had just played a thrilling game in the hurling league last Monday that Watergrasshill won by a point. This game surpassed that and more! What a clash this turned out to be. Both sides knew that a win would probably guarantee the coveted semi-final spot next weekend. Carraig had the upper-hand in the first half and led by 2 points at half time but shortly after half-time, a scramble in our goalmouth led to a Watergrasshill goal. The final ten minutes saw the teams trading scores and with just a minute left Carraig were a point in arrears. Under serious pressure from the opposition , Colm Murphy made a surging run and sent over a sublime point to level matters and seconds later, the final whistle blew. A fair result overall and both teams  gave everthing in a superb game.

As Watergrasshill had now completed their games, we now needed a win in our final match versus Courcey Rovers to progress to the semi finals. But in addition to winning the game, a

ccording to Feile rules, if there is a tie at the top of any group, the team with the least amount of scores conceded in the 4 games progresses. So, after consulting with the Feile Co-Ordinator and tallying all the group results, it was very clear. Carraig na bhFear had to win the final game but not concede more than 3 points.

The players spoke in the dressing before the final game and all agreed that to achieve their goal , it would take an unprecedented level of discipline and self- belief. So, united in their purpose, they took to the field and from the throw-in, the concentration was 100%. Our forwards were defending from the front, blocking and hooking every attempted clearance from Courcey Rovers while also taking every opportunity to score. All was going according to plan in the first half until just before the short whistle, a long ball from the opposition half-back and disaster struck ,a goal for Courcey’s. 1-4 to 1-0 at half time.

The lads regrouped at the break and realised that there was zero margin for error in the second half. Courcey’s had to be kept scoreless……

Whatever about the pressure the players on the pitch were under, the large Carraig support who travelled could hardly bear to watch and every challenge won by our lads was greeted with cheers and then dread when the referee blew his whistle after a tussle between players wondering which way the free would go.

Any frees conceded were kept at a reasonable distance from our goal and any ball that was dropped in towards our defence was capably dealt with by our magnificent defence. The ball control and support play in the trying conditions was first class.

After what seemed like an eternity, the referee blew the final whistle and jubilant scenes of celebration followed. Final score was 2-6 to 1-0. So again, well done to all of the players involved  for the enormous effort on Saturday last and best of luck next weekend.

The fixtures have now been confirmed and we will face Tracton in Caherlag (Erin’s Own) at 4:30pm on this Sunday 15th May. #ArAghaidhnabhFear

*Scorers
Regular squad members Ciaran Ahern and Joe Mulcahy were unavailable last week but hope to be back in action this weekend.