Carraig na bhFears u21 footballers claimed a first championship title at this age for 11 years with a well deserved 1-07 to 2-01 win over Cobh in Lisgoold. Playing against the strong breeze in the opening half, Carraig settled well and an early Conor Hayes point gave the team an early lead they would never surrender. Cobh attacked quickly in the early stages, but strong defensive displays from David Sweeney, Paul Sheehan and outstanding centre back Michael Ahern saw Carraig holding firm. Darragh Cronin and Shane Farrell were getting through a mountain of work on the flanks, while points from Oisin Crowley and the lively Adam O’Sullivan extended the lead to leave us three points to the good after the opening quarter. It was a tight game with both sides guilty of missed chances throughout. Carraig got a big boost on 22 minutes when a long ball in from Oisin found Adam O’Sullivan in the right corner, his pass to Ryan Galvin at full forward dragged the defence out of position before he picked out left corner forward Conor O’Brien, who shot expertly to the back of the net for the games opening goal. From the kickout, Oisin Crowley won possession and pointed after a mazy run, to leave us 1-04 to 0-0 ahead. Cobh were not done however and a long ball over the top found their full forward in space and he finished well for their opening score after 25 minutes. A quick point followed and the seasiders tails were up. Carraig were under pressure for the remainder of the half but defended brilliantly against the siege to take a three point lead to the break, 1-04 to 1-01.

Scores were at a premium in a tense second half. Oisin Crowley was on target again for Carraig early on but a combination of rushed chances and a swirling breeze meant a host of good scoring opportunities went abegging in the early stages. However we continued to dominate, Michael Ahern playing a blinder at centre back held the defence together, while Brendan Murphy and Conor Hayes were a strong presence in midfield. Inside, Conor O’Brien, Adam O’Sullivan and Ryan Galvin continued to trouble their men every time the ball came in. Ryan added a well taken point from close range, sweetly struck off his left foot to extend our lead at the three quarter stage. Cobh were struggling to find their range, but a fortuitous second goal with 12 minutes remaining put the game firmly back in the melting pot. Bouyed by this, Cobh pressed hard in the closing stages, but again the Carraig defence wasn’t found wanting, excellent work from David Sweeney, Adam Gorgia, Jack Ahern and substitute Diarmuid Mullins repelling multiple attacks. Adam O’Sullivan converted a close range free in the 52nd minute and that was to prove to be the final score. Again we missed a number of good chances in the closing stages, which will need to be worked on for the county stages, but the lads displayed great heart and commitment in the final minutes to keep Cobh at bay.

Well done to all concerned on a great victory. At the start of the season we were not sure if we would have sufficient numbers to field a team at this level. This was compounded by further injuries to key players Gary Geaney and Cathal Cronin. On Saturday last, 17 players took to the field for Carraig (including the injured Thomas O’Driscoll) and gave it their all. They showed what it takes to win a final and deservedly captured the honours for themselves, their club and their community. Their persistence and faith was rewarded, we can’t ask any more than that! Well done lads! Ar aghaidh na bhFear! 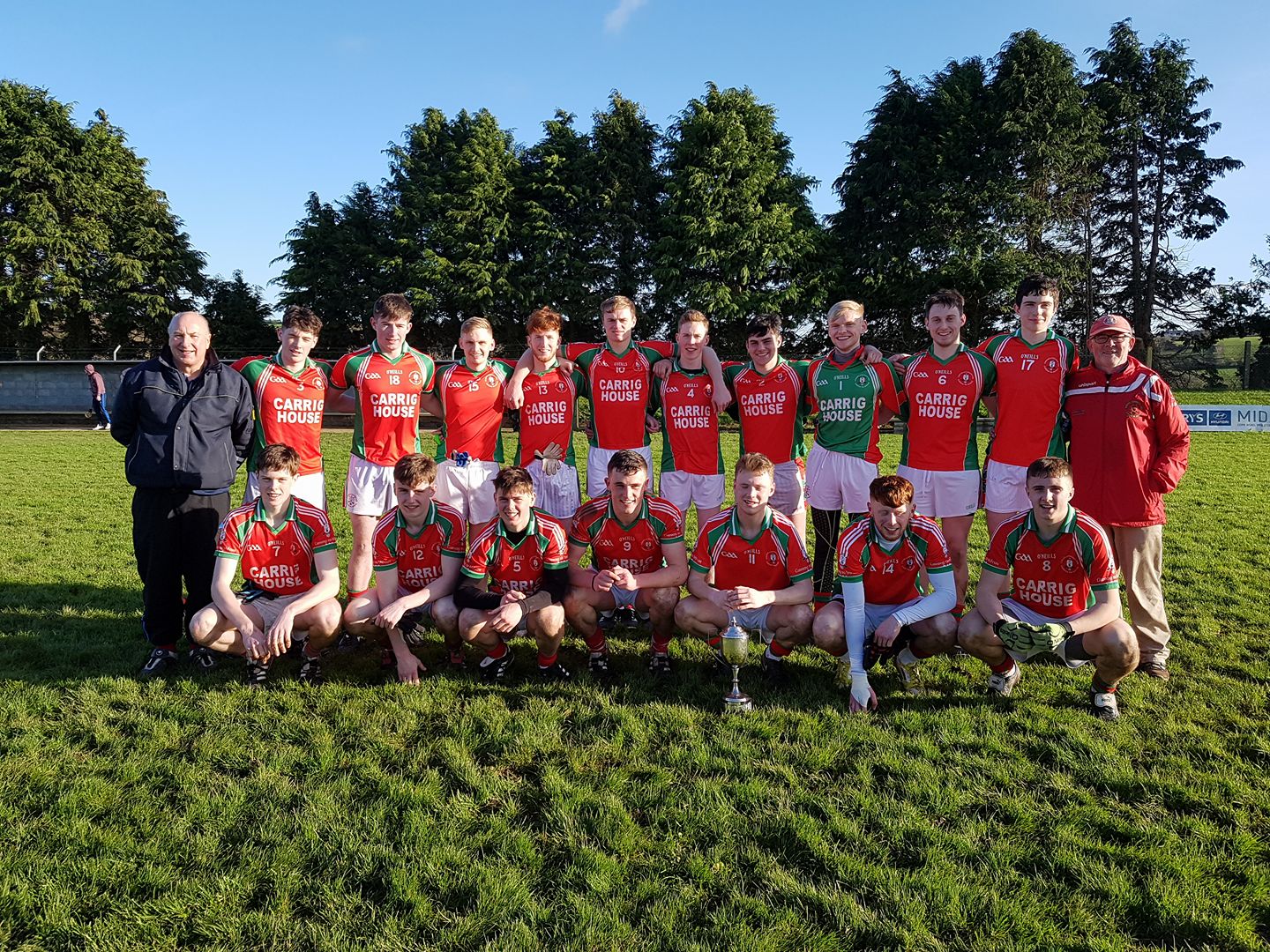