What a day for the Club’s Under 12 Hurling team. The 34th Willie Ryan Invitational Hurling Tournament took place in Aghada on Saturday 12th September. It was an early start for players and parents alike, the convoy of cars arriving from Carraig to Aghada’s GAA grounds at 9.15am. Despite the atrocious weather in the previous 24 hours the pitches were in immaculate condition and the sun was shining again.

The first game of the tounament pitted our lads against hosts, Aghada. This tight affair was a sign of things to come as there was very little between all the teams involved throughout the day. David Dunphy and Billy Connolly controlled the game from their midfield berths and it took a great goal from Sean O’ Donoghue late in the second half  to decide the game. Next up was Fr O’ Neill’s and again there was only a puck of a ball between the two teams at the final whistle. The highlight of this match was a sensational save from stand in ‘keeper, Joe Dunphy. Our regular dependable shotstopper, Martin Murphy, couldn’t make the tournament today and Joe stepped forward to fill Martin’s “boots”. An unenviable task for anyone who has seen Martin in action! Joe’s Under 10 team mates, Micheal Murphy and Robert Sheehan also answered late calls, to make up the team sheet numbers and what a shift these lads put in including 3 clean sheets from Joe and his defenders. 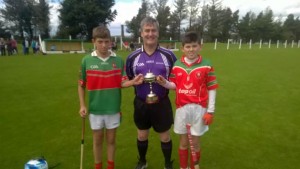 Two wins in a row and things were looking good but next up was Castlelyons and these two teams have had some great battles over their short careers so far. Castlelyons were on top in the first half and were leading by 5 pts at half time. An uphill challenge ahead but this group of players know never to give up or panic and  a superb second half performance with goals from Luke Cremin and Felix Murphy gave Carraig the narrowest winning margin at the end.The full back line of Darragh Tattan, Ciaran O’ Regan and Micheal Murphy was the foundation  for this comeback. They fought for every ball  as if their lives depended on it and this spurred on the rest of the team.

The last group match versus Tracton showed the lads again maintaining the high standards they’d set themselves from the start of the tournament and victory was secured. A final spot guaranteed, the lads made the short trip back to the main pitch to see who awaited them in the Final. Fr O’ Neill’s again……

The final that followed was a credit to both clubs. Carraig started well and our two half backs Kevin Fitzpatrick and Dylan O’Regan were linking up well with the half-forward line of Sean O Donoghue, Felix Murphy and Thomas O’ Hanlon but the scores just wouldn’t come and at half time there was only a point between the teams. Fr O’Neill’s defence was rock solid while Ciaran O Regan and Luke Cremin were running the show at No.3 and  No.6, respectively, for Carraig. This one was going down to the wire and it was going take something special for either team to win it.At the half-time break, the players decided themselves that they were going to leave every ounce on the pitch for that last period of play and they certainly kept the best until last….

From the throw-in, the team were on the front foot and our full forward line of Evan Quealey, Rory Mcarthy and Jason Cashman Cronin sprung into the game.  Two great deliveries to the  inside line from Luke Cremin were finished superbly by ” Cashy” and this gave Carraig some breathing space at last. Evan Quealey finished the game with a rocket to the net in the dying minutes. The referee blew final whistle and there were great scenes of jubilation among the Carraig players and supporters. 5 games and 5 wins later and Carraig had won the coveted Willie Ryan cup! 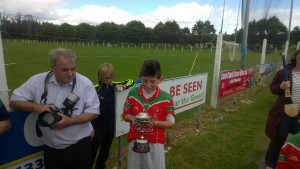 Captain Billy accepting the cup on behalf of the team

Captain Billy Connolly, who lead by example in that final, accepted the cup from the Ryan family and in his speech, Billy thanked Aghada for the invitation to the tournament and for providing all the teams with a platform to showcase everthing that is great about the game of Hurling. This, coupled with hospitality of Aghada GAA Club, made it a day never to be forgotten by this special bunch of players. Well done lads! 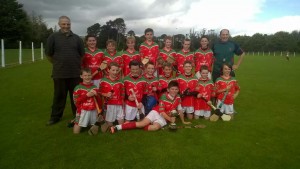 The winning team with their Coaches Pat Tattan and Danny Quealey